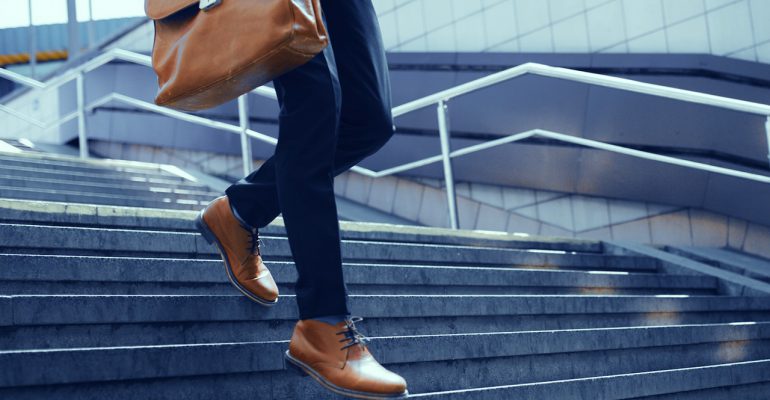 Imagine you are at a train station with many platforms. There are people all around you and there is a hum of noises. In your hand is a ticket with your destination printed on it and the time for you to board the train. Passing through the sunlight on a warm summer’s day is a purring beast with a crimson coat. Its doors open and a swarm of people begin to funnel their way inside; some are patient and others are pushing their way through. A second look at your ticket reveals that this is not your train to catch. In good time, the bustling station is brought to silence. There are a few faces around; some with blank expressions, others deep in thought and one with a smile. “Where did they all go?” you wonder to yourself. But wondering turns to waiting and waiting turns to relief. Headlights are seen in the distance and there is the familiar churning of wheels on a track. It seems the time has come.

Living as a 21st century Christian is a mixture of so many things. It is an arduous climb, a serene cruise, a bitter cup to drink, and a wondrous train ride. Very often paths cross and worlds unknown become familiar. There is the feeling of being in transit and yet ever still. In the depths of the soul there is a space where the human and the divine can meet. It will take a lifetime to truly grasp meaning of this and an eternity to see its completion.

So much of modern life is about “getting there”. We are told our happiness consists in racing for the next best thing whether that is the next Avengers movie, the next overcomplicated iced coffee, or the next hashtag. If you aren’t sharing the inner workings of your life on social media, then you’re scrolling through those of others and if you aren’t doing the latter then you’re just weird. It would appear that we are all on some sort of schedule and falling out of it is a cause for embarrassment. At times it can feel like an interrogation. Do you have a special someone? You still live with your parents? Where is your four-bedroom house and German sedan? None of these things are bad in themselves but it can be overwhelming when we do not have them by a certain age. In times of dissatisfaction with my life, I enter into a wrestling match with God. For the record, I have always lost and walked away with a barrel of humility.

Humility is one way to meet your maker. It takes you to places only God knows. So much of the dissatisfaction I experienced came from the fact that I had neglected to learn why I was put on this earth.  It is as cheesy as it sounds; cue the triumphant music. But it is true. Growing in faith has helped me to know for whom I was made and the untapped potential resting within me. It is easy to forget to this. Too often I am distracted by shiny lights and fast cars. “What’s that you said God? Become a saint? Lol, I’m a little busy at the moment”. In due course, I am humbled yet again and reminded of my nature. It is the potential for greatness, and it is my task to resist the urge to forsake greatness for comfort. But following God by living out the purpose for which you have been made, is difficult. There is the strange feeling that everyone is watching you do things differently. There are many people, even family members, who question your choices, your optimism and even your sanity. Yet, despite feeling insecure about your abilities, you must silence the voice in your head that says you are going to make a train wreck of things.

And that’s the conundrum of it all. Isn’t it? Fear. I remember as a child how much I feared the dark. The shadows of the trees would hang like arms and the wind would sway them. The cupboard doors would creak. On many occasions I would wake up in the night to inspect my room to foil the plans of zombies who were planning an attack or something of that sort. I was afraid of the dark. I was afraid of swimming. I was afraid of men who looked at me with lust. There was always something or someone to fear. And now, here today in an already turbulent 2021 I am afraid. I fear the magnitude of my own dreams. I fear that God has got the wrong girl for the job. I fear that following God will make me uncool, unstylish and unfabulous. I fear that the naysayers may just be right. But as we read in Matthew’s gospel, Jesus tells us ‘Do not be afraid’ (Matthew 10:31). I read somewhere that courage is not the absence of fear but the ability to continue in spite of it. I know, I know, it sounds like something that should go on a coffee mug and perhaps it does. We will always be afraid of what we’re capable of, but should that stop us? Should we give in and do the predictable and the expected? I suppose we could but at what price?  Think of how much one would need to suppress in order to stay ordinary and average.

Imagine that your train has arrived. The silence of the station is interrupted by shuffling feet. You hand in your ticket. The train is half full and you look for a seat next to the window. The doors close and all with which you had been acquainted is left behind. Ahead of you lies another world. You know where you’re going but there is still wonder. Wonder turns waiting and waiting turns to hope. There is hope for the extraordinary, hope for the unprecedented and hope for newness of life.

The Grane Lux Community welcomes voices from diverse spheres to share their stories whether it’s through their writings, vlogs, videos etc. The contributors meet our guidelines prior to being published. However, the range of opinions may not necessarily reflect our own.

Don’t forget to comment, we love to hear from you.

We are a resource hub providing tools, ideas and inspirations to empower you to live a life that is more fulfilling and impactful. We created a platform for those whose curiosity has opened a space for empathy, growth, compassion and ultimately love because we understand the desire to live a life that matters.

Menu
Select the fields to be shown. Others will be hidden. Drag and drop to rearrange the order.
Click outside to hide the compare bar
Compare
Wishlist 0
Open wishlist page Continue shopping